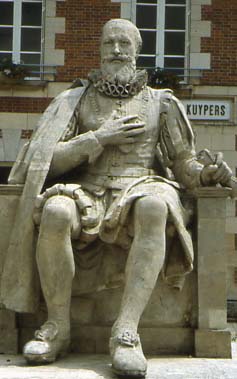 Statue of the Duke of Sully
Bradford on Avon where I live is twinned with Sully-sur-Loire in France. The Duke of Sully (1569-1641) was the First Minister of Henri1V and together they gave France 20 years of much-needed peace. Following the Wars of Religion, the Edict of Nantes guaranteed religious tolerance.

The Duke of Sully was passionate about tree-planting and he started the tradition of planting poplars alongside roads - an image which, for many, typifies France.  He also planted trees for commemorative purposes. Many have died but some lime trees still remain. No definitive list of them exists.